A TASTE OF LOCAL AT OUR WOWZULU MARKETPLACE

At the Marketplace in the heart of bustling Ballito, treat yourself to great coffee and a ‘taste of local’ cuisine created by award-winning chef Phumlani Mthembu. For a unique culinary experience, let Phumlani teach you to cook local dishes. From the Marketplace, trace the steps of the legendary Zulu King Shaka and of Africa’s first Nobel Laureate, Chief Albert Luthuli.

The guided ‘Walk with Warriors’ starts in Groutville at the Luthuli Museum, once the home of legendary Nobel Peace Prize winner Chief Albert Luthuli, an icon of South Africa’s freedom struggle. Visit the museum which celebrates his legacy, then walk in the footsteps of Luthuli from the church where he was buried, through the village of Groutville and along the railway line to the “accident” scene that claimed his life.

From Ballito, travel with a story-telling guide north across the mighty uThukela (or Tugela) river to the Amatikulu Nature Reserve. Meet your bird guide for a leisurely canoe ride along the Amatikulu River, viewing bird life and seeking the elusive Green Barbet. Enjoy a picnic lunch under a tree, then travel to Fairbreeze Honey Farm where Mr Bethwell Sithole, the resident honey master, will reveal the fascinating life of his beloved bees.

Tidal Tao’s Snorkel tour takes you along the coast from Sheffield to Thompson’s Bay, exploring the underwater world of rock pools at low tide. Stop for breakfast along the way, picnicking on a wide expanse of golden sand. 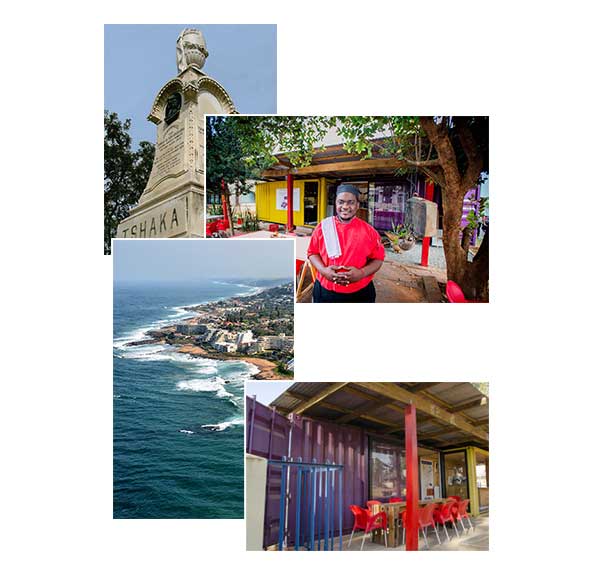