Step into the friendly rural Isandlwana Village below Isandlwana Mountain, the site of a famed Zulu victory over the British in 1879. Isandlwana is at the heart of the once blood-drenched KwaZulu-Natal Battlefields, where British, Boers and Zulus all took turns to wage war against each other in the late 19th and early 20th centuries.

Great local places to stay include the spectacularly situated Isandlwana Lodge, which nestles into the rocky hillside above the Marketplace, as well as the nearby Fugitive’s Lodge and Rorke’s Drift Hotel.

The WOWZULU Marketplace inside the museum where battlefield bookings are made, is your friendly home in Isandlwana. Buy locally made craft or enjoy a coffee, cool drink and snack on the veranda with its sweeping views across the village and mountain, while our team tells you stories of the area.

The Marketplace is the starting point of guided experiences in the village or area beyond: A village walk; a bicycle ride to a neighbouring village and visit to the home of a craft producer; a hike down the ‘Fugitives Trail’ along which Zulu Impis chased fleeing British soldiers; or a drive to Nondweni village to visit a thriving craft cooperative.

VILLAGE WALK
Let a local guide take you on a walk through the picturesque Isandlwana Village. Visit a modern home as well as a traditional homestead to learn how Zulu families used to live; a sangoma or traditional healer;  a historical church; a local school and a safe haven for children.

FUGITIVE’S TRAIL
From the Marketplace, the scenic 8 km ‘fugitives’ trail’ leads through the Battlefield aross hills and valleys down to ‘Fugitives’ Drift’ on the Umzinyathi (Buffalo) River. White stone cairns are reminders of British and Zulu soldiers who died as Zulu warriors pursued fleeing British soldiers. This beautiful 8 km hike takes visitors through a nature reserve with impala, zebra and other game.

BIKE RIDE
Our 6 km bike ride goes from the Marketplace to neighbouring Isandlwana Section 1, past a cattle dip and striking conical hill. Cyclists stop over at the picturesque homestead of master crafter Mpume Mazibuko, whose family serve visitors steamed bread and tea while visitors under a tree and can learn to make a simple beaded object. The return drive can take an optional loop through the Battlefield.

VISIT TO CRAFT COOPERATIVE AT NONDWENI
Spend a half-day visiting Berthina Khumalo’s thriving Wire Nest Cooperative at the Langazela Centre in Nondweni, 39 km away. Their colourful embroidery on recycled mealie/maize bags has won design awards and is exported across the world. 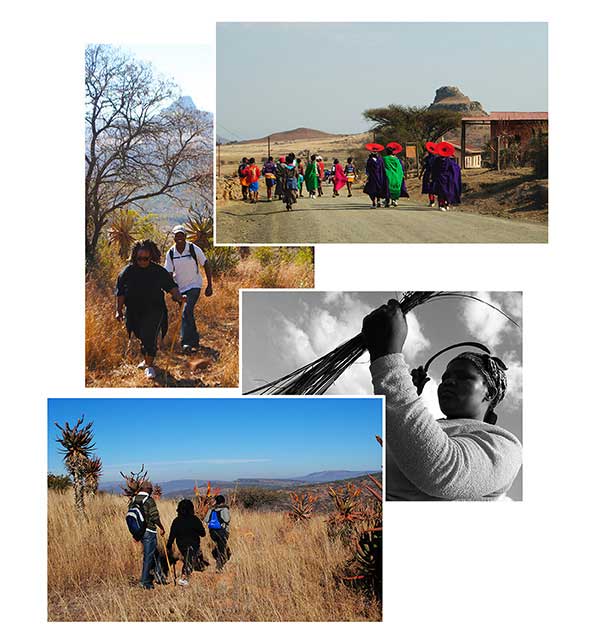